I like to read the books on the blog Your Homebased Mom, she always does a synopsis of the books she has read and rates them. Lilac Girls was one of the books she recommended and I finally got to read it this week. I have to admit I really have mixed feelings about this book. I didn't really think it was as good as some that I have read about WW2 and the things people went through in concentration camps but having said that there were a couple of things that really gave me something to think about. 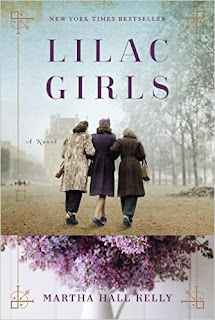 First, one of the characters was a German doctor who had truly adopted the attitude that if the people were in the concentration camps then they had done something to deserve it. It was an insight to how some of the German people had really accepted the propaganda hook, line and sinker. It also made me think about how easily people today are just the same. We believe everything the news tells us depending on which news you listen too it skews your way of thinking that direction. The whole idea made me think about the fact that I need to confirm what I hear and not just accept something because others believe it.
The second thing that I had never really thought about was what happened to the survivors of the concentration camps. How do you live through such a hellish ordeal and then just go back to your old life? I mean, yes, they were grateful that they survived but did they also have guilt because they survived and so many didn't? How did they go back to daily life? These are questions I had just never thought of. I always thought about the tragedy of the people who died in the camps but never wondered about the survivors.
So, despite my initial critique, this book made me think about things I'd never really thought about before and for me that means it is a book worth recommending because it wasn't a book that I read, put down and never thought of again. This one keeps coming back to me so I can chew over it again. I would recommend that you read it. The violence and sex were referred to but its wasn't graphic so I would feel comfortable letting an older teen read it also.
Lilac Girls is Martha Hall Kelly's first book. For a first novel I thought it was pretty well done and I could tell that she had done a lot of research. I will look forward to reading her work again.

Posted by Huskerbabe at 9:43 PM