When hubby and I lived in England we developed a taste for English television, especially their humor. As the years have gone by their shows have become so explicit I would hesitate to watch most of them. Enter NetFlix. If you have Netflix you can order older television shows and an added bonus is you get to watch them commercial free!
Our daughter told us about Jeeves and Wooster which she had found at her local library. We are watching the first season and enjoying it immensely. This show was adapted from the Jeeves series of books written by P.G. Wodehouse. The main characters are Stephen Fry and Hugh Laurie. These two actors were also in the Black Adder series and Laurie of course is a household name in America now thanks to the show House.
What I like about these shows are that they are funny and yet clean. You could watch them with your children and not worry about what was said. Another thing I appreciate about them is that they are not predictable. There is always a  bit of a twist to the plot that keeps one entertained. Check them out. 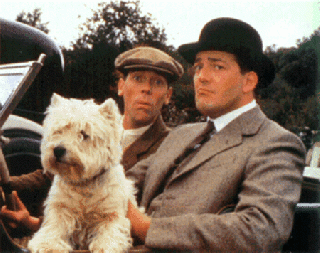 Posted by Huskerbabe at 8:53 AM

Our neighbors and dear friends are from England, and have often talked about Black Adder. I hear it's very funny. Lucky you being able to live there for a time. I've always wanted to visit!
Blessings, Jill