The Hardest Five Years Of My Life

Five years ago we had taken in our grandsons on what we had assumed would be a temporary basis. They were both healthy, although we suspected Alex was behind in his development. I thought he was just a slow learner.
It was the end of April and we were preparing to go home to help my inlaws celebrate their 50th wedding anniversary. On Wednesday Alex made some strange head dropping movements. I had never seen anything like it and it raised some red flags. I took him right in to the doctor, but of course he didn't do it again, so the doctor looked him over and sent us home.
On Saturday as we were preparing to celebrate with my husband's family Alex did those strange movements again, several times. For the first time my husband was able to see them too. It concerned us, but he stopped. He grew very tired so I took him back to the house and he slept for hours. Later that evening he did it again and we decided to take him to the hospital. We were away from home, seeing a doctor we had never seen before...and Alex seemed fine. The doctor listened to us, believed us, even considered sending us to Children's Hospital in Omaha, but in the end decided to send us home. He cautioned us if we saw it again to videotape it and get to our doctor right away.
We went home on Sunday and within hours of going home Alex started the strange movements again. This time we got it on video and headed to the emergency room. The PA on duty was immediately concerned. She kept us overnight for observations and then arranged for us to get to Children's Hospital as soon as we could get there.
By the time we got to Children's we were positive that Alex was having seizures and they were increasing. He was having them for several minutes, several times an hour. He was diagnosed with Infantile Spasms...and the prognosis was not encouraging. They told us that the seizures can cause brain damage and Alex could end up severely retarded and in some cases death occurs. I'm sure that for awhile our hearts just stopped. We were stunned that a healthy child could be so sick in such a short time. They told us that our best chance to stop the seizures was something called ACTH, a type of steroid, that would have to be injected twice a day. Alex would have to stay in the hospital for the week for tests.
For the next 6 weeks we made weekly trips to Omaha. We spent our 25th anniversary in the hospital. (incidentally, not quite the trip to England we had always planned) The shots made Alex miserable. He quit laughing, then he quit smiling. His body swelled up and his skin was tight. I was afraid to pick him up because it hurt him. But the seizures stopped. Praise God...they started to slow down and then they stopped. The end of July we were able to quit giving him the shots. It was about another month when we heard him laugh again. Breck and I cried. We had hope for our little boy.
When Alex first got sick I called our daughter. I was certain that this was God's way of bringing her home, back into the lives of her little boys. I could picture her turning her heart to God. But instead, she was like Pharoah, and hardened her heart. She had all sorts of reasons why she couldn't come. Looking back, I should have known then that she would never want her boys again, but I was in denial about that. My other children say that everyone but me knew. I guess I had more hope than they did.
Alex started to develop more normally but he was very behind. About the time he was finally starting to crawl, the seizures started back up. And this time they were a different kind. Apparently this is not uncommon. We tried several different meds but it wasn't until six months later and a combination of meds that they finally stopped. We spent a week in St Paul, Minnesota at the Epilepsy Center. They gave us lots of good ideas on helping him. They also cautioned us that if his seizures ever started up again, we may not be able to stop them next time.
It has been five years of hard work, and many tears shed for this little boy. He has to work twice as hard as his brother just to learn basic skills. He is still behind but is slowly catching up. Two years ago he could barely speak, now he knows his alphabet and the sounds of the letters and he's putting words into sentences. He can't ride things with pedals, but he can ride a scooter almost as well as his brother. In the past years we've had added diagnoses from doctors. Alex has intractable epilepsy, a mild form of cerebral palsy, fetal alcohol syndrome, ADHD, developmentally delayed and is considered to be on the autism spectrum although not diagnosed with autism.
This is just the tip of the iceberg of Alex's story. We have been through many trials with this young man, but we have seen many prayers answered and we consider him a miracle considering what he's been through. Our family, friends and church have been the support that we needed to get through the dark days. In those first weeks after the diagnosis, we could feel God calming us in such a real way that I will never be able to explain it. But He was there for us when we needed Him most. It's been a tough five years, and we know there is still a rough road ahead. We continue to trust God to keep him promises and remind ourselves that God has a plan for Alex...we just don't know what it is yet. 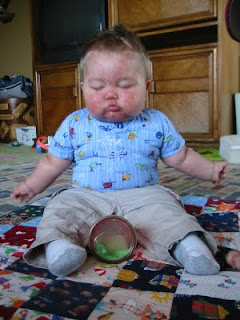 one month after taking the shots 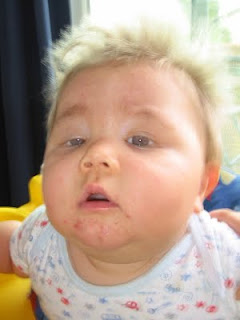 Alex's first birthday, just before we quit the shots 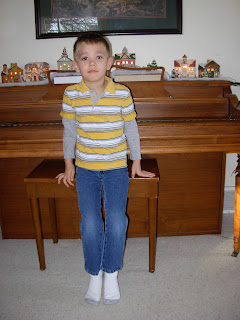