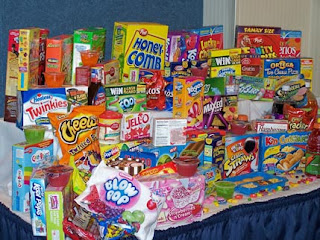 About 15 years ago I noticed that often if we went out to eat that I would react badly that night. For instance, if we went out to supper many times by midnight my hands would be swollen and tight, I would be extremely thirsty and sometimes my heart would even pound all night. ( a particular time where I unknowingly ate something cooked in whiskey comes to mind) So I have been aware of how food additives can affect us for quite some time. I try to avoid processed foods. Last Friday night we went to a company party with my husbands coworkers. By 10 o'clock I knew I was in trouble. My hands were swollen, I was incredibly thirsty. Even though I drank plenty of water hoping to flush it out I woke up Saturday with one of those headaches where you feel like your head is about to explode. I suspect it was nitrates or salts in the meats or potatoes that were served.
In the last couple of years we have learned that Alex is allergic to food dyes. Once we learned this and have been careful about what he eats his behavior has improved immensely. We have been able to take him off his ADHD meds and he does just great...unless someone feeds him things with food dyes. And there is the rub...it happens quite a bit. Last month he had red m&m's in sunday school. We spent the afternoon stopping him from hitting his head on the wall, throwing toys, kicking anyone who got close to him. Yesterday he had those little goldfish crackers in sunday school and we had a similar day. A friend gave him Altoids that are made with red dye #40 and he acted like he'd had speed. Food dyes are everywhere and in foods that don't even need added color. You have to read every label...I mean every label. The other day I picked up something that was white and it had dye in it. What??? Gum is another thing we have to be careful with.

I have found some vitamins that are colored with carrot and beet juice. And I recently discovered one kind of fruit roll ups that don't have food coloring. I'm glad to see some manufacturers are  trying dye free items. I hope they sell well so more are produced. Until then I'm going to have to continue to read labels.

Here are a few links about this increasing problem:
http://www.cspinet.org/new/200806022.html

i am a label reader too! i try to get things will recognizable ingredients, or i make it myself. not much to choose from at the store if it's prepared already!