We have a very nice little fabric store here in town called The Silver Thimble. Every month they have Thimbleberries club and do a block each month. I had wanted to join for quite awhile and last year I actually remembered it before the first one started in January. My motivation for joining was that if I had to do a block each month I would actually get a quilt finished instead of another UFO project. It was a great idea, and it worked in principle. But then we got to November and the border. The thought of making 196 sawtooth blocks was a bit overwhelming to me and I lost momentum. So I have beautiful blocks made, I just need to get them assembled and finished up. (But then again, that is another story for another day, and I found a secret weapon that I'll tell you about later)
Tonight is the first Thimblerries meeting for 2011. I got my first month's pattern and the fabric. We have an entire month to finish it, which is good since I'm still working on all my other projects. This year's pattern is called Border Blast and I'm working in the Northern Lights colors. 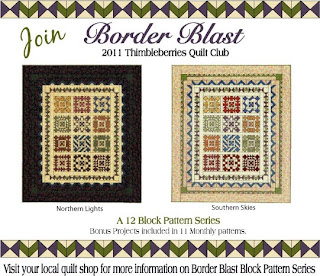 You can get a better look at them here at the Thimbleberries website.

A side benefit from joining this club is that I have met a lot of really neat women who are all willing to share the skills and knowledge they've picked up. I know that this is a place I can go with my questions. And to be honest it's just plain fun!
Posted by Huskerbabe at 2:44 PM