I picked up this book at the library a couple of weeks ago. I already know a little bit about Ben Sasse as he is our senator and has been in the news quite a bit as a conservative Republican who does not flinch when it's time to tell the President that he's wrong. Sasse is a strong conservative who is more about protecting our Republic rather than sticking to party lines so I thought I'd pick up his book and see what he had to say. 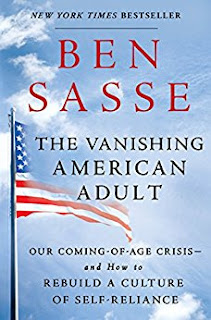 Before I start I should say that I don't care to read non-fiction. I actually have to force myself to read non- fiction for work so the fact that I read this at all is probably a compliment to the author. I do like most of what I know about Ben Sasse. He and his wife homeschool their children and as a former college president he obviously takes their education very seriously. Anyway, about the book...

The gist of the book is that our children are spoiled, pampered, self centered and are not prepared for adulthood. The author addresses how they got that way and he is not letting parents off the hook here. If our kids are that way it's because we have made them that way by giving them the best of everything without requiring effort on their part or simply going with the flow of society because it's easier. As a historian he is very thorough in explaining the roots of how our country was in the beginning and how we got to here, but the best part is he is that he also offers some real life solutions to try to get our children to become better adults and thus better citizens. You know what I mean, like working for what they have or learning to serve others and (gasp) even reading a book that isn't in the YA section of the library. He suggests that we teach our children to learn how to solve problems and to be more self reliant.

Need vs Wants- this is a conversation every person should have with themselves and then with their children.

One thing that stuck with me is how quickly things have changed. He compared college kids today to his experiences 20 years earlier. As a parent raising two different generations I can really relate to this. The things that kids are dealing with now are totally different than what my older children had to deal with. Yes, some things are the same, but many are different.

He also touched on the fact that kids today for the most part are totally removed from the work part of their parent's lives. They don't see their parents working hard all day just to provide for what the family needs. My husband and I were both raised on ranches and we not only knew how hard our parents had to work we were right in there working with them. We understood how much work it took to earn that money so we understood why we didn't waste it on frivolous things. I see that many kids today have no idea about work.

I thought the book was a good read. I did get a little lost in the chapter where he talked about his European travels. I was looking forward to his suggested reading list. This is a list of books he would like his children to read by the time they are 18. Um, well, this is one tough list and I hope his kids are a lot more focused and smarter than me. I did agree with his suggestion that teens should read Shakespeare. When I was in high school we read three Shakespeare plays and I learned not only about how to read and dissect harder materials, I also learned a lot about life and History. I don't think they read Shakespeare in high school now, at least not around here.

One of my favorite parts of the book was at the very end where he wrote a speech that Teddy Roosevelt might have given to a high school graduating class were he alive today. I've always been a fan of Teddy so I enjoyed the speech and even found myself hearing it spoken in what I consider to be Teddy's voice in my head.

So what did I take away from the book? That I need to be more diligent in teaching my kids and grand-kids how to learn to solve problems, to encourage them to be more self reliant and to take opportunities to serve others. That making great adults also makes great citizens.

Note: This morning my 14 year old son asked me when I was going to get him a phone. I said you have a phone. (he has a phone called a Gizmo that can call 4 numbers and only the numbers we programmed in) He said, "No I mean when are you going to get me an I Phone or something like it?"
"Hmm", I said,"Why don't you ask the older kids when they got phones, and trust me you aren't going to like the answer."
By the way I never bought my older kids smartphones. The oldest was in the Navy when she bought her own phone and the younger two had a "dumb" phone when they were 17 and 15 that they had to share and they only used it when they left home since we lived 20 miles from town. Until that time, if they were going out I just loaned them my phone to use. (gasp)
Posted by Huskerbabe at 8:49 AM

Good review and every interview I've heard with Sasse both concerning this book and politics in general, really make me want to like Sasse. But then I look at his voting record and it's pretty much party line and in-step with Trump, even when he issues a statement critical of the legislation. It's frustrating.

Still, when it comes to what I've heard him speak about when he was on his book tour, it sounds like a good read for most parents.